Marshes and wetland are located in CHKO Záhorie (protected area), in NNR Zelienka and NNR Červený rybník (National nature reserves). The highest 5th grade of protection is in force in here. Walking off footpaths is strictly prohibited!

Flora of the wetland
On the meadows near both reserves the plants of marshes (fen orchids,iris, dianthus, brook thistle) attract visitors. The brook thistle is common on the meadow near NNR Červený rybník. In spring the Siberian Iris and other rare flowers can be seen near the brook Lakšár.
In summer, in the watery areas in NNR Zelienka, striking tufts of sedge stick out of water. Superb also are the peat moss areas where the inconspicuous tree frogs hide. Peat moss is a carnivorous plant , strictly protected. When the water level falls yellow-flowered bladderwort appears in abundance. Bulrush often springs up too and it is particularly appealing by children. Ferns are also very common and they create mats here and there. Club moss meanduring near pines can be seen around the National Nature Reserve of Červený rybník. During the spring months Lilly of the Valley flowers around the edge of the National Reserve. 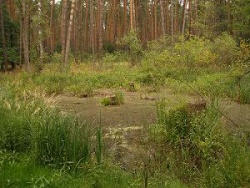 Fauna of the wetland
Common Gnat flies near and far the water areas, the females of which suck the blood of humans and animals. Brown Aeshna, a kind of Libellulas attracts attention. The area’s pride and joy are amphibians – especially European tree frog and marsh frog. European toads are also in abundance. Reptiles around the marshes are made up mainly of ring snake, although grass snake can quite often be seen as well. This snake is native to watery areas. The Common lizard is very common.
The above mentioned amphibians and snakes are protected species! There is a great presence of aquatic birds. Gaggles of geese, ducks and cormorants stop off here during their migration. NNR Zelienka is a paradise for birds in spring. Grey heron is very common and on the other hand Gadwall is very rare in Slovakia.
Shrews - mammals, which we can see on the meadow near NNR Červený rybník – are an interesting phenomenon. Tree bats deserve a mention too- especially the water bat and noctule.